I was in a taxi a few years ago, and my cabbie was the coolest-looking-ever Jamaican dude. I was chatting with him whilst surreptitiously staring enviously at his outfit when the music he was playing filtered into my consciousness. “Dude, this is awesome, who is this?” I asked. He paused for a moment and looked at me in the mirror, sizing me up. “It’s the Alarm Clocks,” he said slowly. “You’ve probably never heard of them. They are…from a long time ago. 1960s”.

Although I am hardly a stranger to music recorded in the ‘60s, he was indeed correct. I had never heard of the Alarm Clocks, but as soon as I got home I went to the internets to find out more about them and download their music. If you’re already familiar with this band then you don’t need me to tell you that they were literally the textbook definition of garage rock, three high school students from Ohio who got together in 1966 and played in school gymnasiums and at local events. Eventually they decided to make a record, despite the fact that they only had one original song, ‘No Reason to Complain’ (the rest of their repertoire being covers of songs by bands such as the Rolling Stones, Kinks, and Beatles). As legend has it, on the day they went into the studio they realized that they needed a b-side for their single and so they wrote ‘Yeah!’ on the spot and recorded it live, in one take. They had only 300 copies pressed of their self-released 45, and then disbanded in 1967. 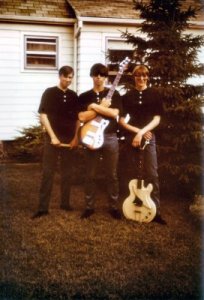 It wasn’t until the late ‘70s that a couple of local musicians who collected old garage band records stumbled upon their 1966 recording and brought it to the attention of the owner of Crypt records, who liked the single so much that he included it on a compilation called Back from the Grave that was released in 1983. This brought the Alarm Clocks to the masses (or, at least, to a critical few) and ‘No Reason to Complain’ appeared on Mojo’s 1986 “Top 20 garage rock songs of all time” list.

The 45 was reissued in the ‘90s by New York’s Norton Records, and in 2000 they collected together and additional 10 songs recorded by the band in 1966 (all covers, including the requisite ‘Louie Louie’) to release a full-length LP titled ‘Yeah!’ If you haven’t heard this record, please go out and listen to it now. I can pretty much guarantee that you’ll love it. It’s hard not to be enchanted by the Alarm Clocks’ boisterously loose energy, and lead singer/bassist Mike Pierce has a truly awesome scream that, to me at least, sums up the joyful freedom and unfettered spontaneity that epitomizes this genre of music.

You can listen to ‘Yeah!’ and ‘No Reason to Complain’ here: (but their covers are pretty rad too so check ’em all out!)

This entry was posted on Wednesday, August 31st, 2011 at 1:12 pm and tagged with covers and posted in Album Obsessions. You can follow any responses to this entry through the RSS 2.0 feed.
« ‘Hero’ FTW!
Someday we’ll find it, the Rainbow Connection »