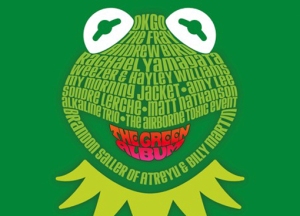 When I was a kid, the Muppet Show was like, THE SHIZZ, people. I loooooved it so much. Confession: until about the age of 5 or 6, I TOTALLY thought the Muppets were real! Like, alive & breathing and running around and stuff. I used to have dreams that I was pals with them. I think this is partly due to the fact that my parents found a cassette tape somewhere that was a recording of all the Muppets telling bedtime stories and singing songs. I don’t know where it came from, but it had all sorts of great stuff on it. Each Muppet told a different bedtime story, and I remember particularly liking Kermit’s which involved a prince and a castle and a riddle. Anyway, listening to the tape as I drifted off to sleep was like having a little party in my bedroom every night with characters that came to feel like old, familiar friends.

So you can imagine my excitement when I was in a Starbucks recently (like, c’mon Spencer, do you live at Starbucks? Why don’t you just marry it?) and discovered that someone decided to make a record of bands COVERING CLASSIC MUPPETS SONGS!!! Amazing. Perusing the back of the CD jacket I could see that all the old standards were there — the Muppet Show theme song, ‘Movin’ Right Along’ (one of my faves — in fact I still sing it to myself on a fairly regular basis), ‘Mahna Mahna’, ‘Bein’ Green’, ‘I Hope That Something Better Comes Along’, and, of course, ‘Rainbow Connection’.

YOU GUYS. You have no idea how much listening to this record brought me RIGHT BACK to feeling like I was 6 yrs old again. I was amazed to see how many of the songs and lyrics I still remembered, even after all this time. I guess if you listen to something every night for years, it seeps into the old brain channels. Anyway, I think that they did a great job with these covers. Standouts for me are Alkaline Trio’s version of ‘Movin’ Right Along’, My Morning Jacket’s ‘Our World’, and Sondre Lerche’s ‘Mr. Bassman’, but I would say that the album as a whole is quite delightful. And I would imagine that for you parents out there, this is something you could play for the kiddies.

OK Go with my pal Kermit

Anyway, my Song of the Day is my favorite track on the album, Weezer and Hayley Williams of Paramore covering ‘Rainbow Connection’. Hayley Williams’ voice fits surprisingly well with Rivers Cuomo’s, and I love it when the full band kicks in about halfway through the song. (Sidenote: is anyone else slightly confused by the line ‘Why are there so many songs about rainbows”? Because the only other one I can think of is Judy Garland’s ‘Over the Rainbow’. Am I missing something — are there others??)

So Happy Friday everyone! This one goes out to all the lovers, the dreamers…and me!

**There’s no vid for this one — ya gotta click here to listen!

But here is a video, of OK Go performing the Muppet Show Theme:

This entry was posted on Friday, September 2nd, 2011 at 1:04 pm and tagged with covers and posted in Song of the Day. You can follow any responses to this entry through the RSS 2.0 feed.
« Album Obsessions: The Alarm Clocks – Yeah!
Song(s) of the Day: a couple of classics from a man who knows his music »

2 responses to “Someday we’ll find it, the Rainbow Connection”