When my birthday rolled around this year, Thinfinn asked me what I wanted for a present.

“A pair of Docs” I answered immediately.

Like practically every other young person who came of age in the early ’90s, I had owned a pair in high school that I wore until they were worn out. Mine were navy blue, 8-hole, and I got them during the summer between grades 10 and 11. At the time, I loved them for a multitude of reasons: they looked great with everything, they annoyed my mother (“are you going out to kick someone’s head in?” she would ask as I was on my way out the door), and mainly because I just felt badass when I was wearing them.

When I first met The Finn he was still rocking the pair of 8-hole ox bloods he’s had since the ’90s, and I just thought they looked so cool. After he purchased a pair of 8-hole cherry reds a couple of years ago, I seriously started obsessing on the idea of picking up a pair for myself. I didn’t want to rush into it though. With these boots, the more worn in they are the better, so I knew mine had to be ones that I’d want to wear all the time.

END_OF_DOCUMENT_TOKEN_TO_BE_REPLACED

10 Comments | posted in Spotlight on Style 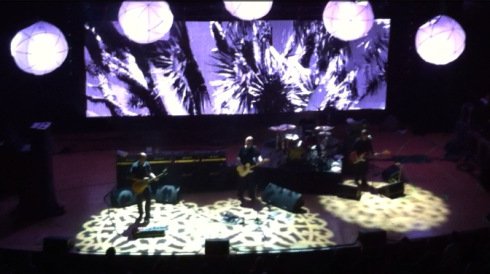 Three curious things about the Pixies concert Tuesday night: first, their decision to play their debut album Doolittle from beginning to end. Second, they began the concert by playing B sides and outtakes. Third, of course, is the date. It’s 2011, the album was released 22 years ago, and the Pixies have long since disbanded. What’s going on?

END_OF_DOCUMENT_TOKEN_TO_BE_REPLACED

Aw, you guys! Our little Doolittle is all grown up! It was released 22 years ago today, on April 18th, 1989. Thinfinn and I just so happened to see the band play the album in its entirety tonight at Massey Hall and let me tell you, it has aged beautifully. As Kim pointed out during the show, at 22 Doolittle could be in college by now! Perhaps it’s lounging around in its dorm room right now, listening to itself on college radio. I certainly hope so!

Our review of the Pixies show to follow soon… For now, Happy Birthday old friend!

Waiting for the Godots in Popular Music

There are moments in songs you wait for. Sometimes it’s by accident, often it’s by design, but regardless of their origin, pop music is littered with unforgettable moments in songs, or ‘Godots’ (with apologies to Samuel Beckett).

There is no one universal feature that defines a Godot, other than it’s brevity and some element of surprise. It stands out, and calls emphatic attention to itself, maybe because of its incongruence from the rest of the song, or maybe because it’s delivering a much anticipated ‘payoff’, or maybe because it is so god damn irritating.

Here are but 10 examples:

10. Take the Money and Run – The Steve Miller Band

This insanely listenable song, just as fresh the 100th time you listen to it as the first, is a glorious soup of hooks, harmonies, jangly guitars and feel-good “hoo-hoo’s” (the latter of which I’ve always suspected were the sound a train pulling away, perhaps shuttling these bank-robber stowaways to freedom).

For a particular moment to stand out in this AM masterpiece – the song itself is more or less one long hook – is not easy. But nestled at the 0:35 and 1:14 mark of the song are two quick successions of 5 hand-claps that steal the show.  You’re waiting for them as soon as the song begins, it’s difficult to resist clapping along when it happens, and you are more or less biding your time until it occurs again the second time, after which you can finally relax and enjoy the rest of the tune.  A quintessential Godot.

END_OF_DOCUMENT_TOKEN_TO_BE_REPLACED

9 Comments | posted in I Love Music

first let me preface my latest list with my criteria for being included in the infamous “top ten greatest rockstars” of all time. the members of this esteemed club have to have a rare combination of qualities: firstly talent, followed by a nihilistic approach to drugs and life that would make any of us regular folk quake in our respective boots. or, for some, a position on the spectrum of sanity thats leads to incredible creativity but also to a seriously truncated life due to severe depression mixed with utter recklessness. one other thing: i really tried to get some women on this list but i couldn’t come up with any and i’m not putting janis joplin on here just because she died. i thought of madonna but although she is a superstar of immense proportions she seems to be almost more of a business model than a rockstar. i’m not slagging her because i like her but she’s not ……dangerous enough for me.

was there anything that morrison lacked? the epitome of rock stardom, perfect symmetrical chiselled features, insanely cool, leather pants and pirate shirts, a big beautiful bellicose baritone of a voice, unparalleled charisma and a wild side of pure unfettered freedom that unfortunately led to a very short career and an early death. a creative visionary who led the doors, which could go down as the quirkiest “big band” of all time. if you listen to the instrumentation and their very peculiar songwriting style it almost sounded as if “the carnival was in town”. yet they could be the “pound for pound” choice for bands with the most hits in ratio to their short career. they were only around for a few years but they contributed so much to our musical landscape.

as much of a creative collaborative force as the doors were, it was morrison that made them cool. he was also a sex god for the ages, and must have enjoyed his short time here immensely what with the freewheeling, free lovin 60’s in full flight.

a drug and alcohol user of copious amounts which will certainly become a common thread throughout this list, james douglas morrison flamed out in a bathtub in paris at the tender age of 27.

truly one of the most iconic front men to ever pick up a mike, a pure pagan, the lizard king will never be forgotten. long live the king!

END_OF_DOCUMENT_TOKEN_TO_BE_REPLACED

attached please find my review of the raveonettes’ concert of this past saturday april 2 in toronto at the phoenix concert theatre. i trust that you will find the content of the review to be satisfactory, however should you should require file in another format, please do let me know.

END_OF_DOCUMENT_TOKEN_TO_BE_REPLACED

Get Yr Rage On

Soooooo…it’s been a bit of a tough week for your pal Spencer. The universe sent a couple of not-so-subtle f-you’s my way. A bit of a kick in the teeth, but they were also (I begrudgingly admit) kind of hilarious. The types of things where you’re just like “really…..?? haha. amazing”.

I do believe in signs, though, and even though these ones sucked, sometimes negative situations can be a catalyst for change. So here’s hoping for that.

In the meantime, I’ve been experiencing elevated levels of frustration and annoyance. How to deal with these sentiments? My methods for coping generally involve listening to angry and/or aggressive music, cranked up as loud as possible. Yeah I get dirty looks on the subway, and there is no way possible that I’m not damaging my eardrums, but I DON’T CARE. There’s something about listening to other people rage out that helps exorcise the demons of negativity.

With that in mind, here is a list, in random order, of some of my fav songs for anger management:

“How can hell be any worse when life alone is such a curse?”

END_OF_DOCUMENT_TOKEN_TO_BE_REPLACED

4 Comments | posted in I Love Music