You guys. Not only is “Elvis Impersonator” an actual job, but for some people it’s their only job. Isn’t that crazy? I mean crazy awesome of course, but still…what is it about Elvis Presley that, almost 35 years after his death, people are still so fascinated by him? Think about it, who else inspires the same kind of idolatry? There are quite a few Michael Jackson tribute artists, sure, but Jackson’s final years were tarnished by allegations that he could never quite recover from. Marilyn Monroe may enjoy status as a 20th century icon at a level close to Elvis, but to the best of my knowledge there’s no annual convention of Marilyn impersonators. So what’s the big deal with Elvis?

To answer this question, I decided to conduct some not-at-all-scientific field research. Where better to start than with the two biggest fans I know? The results of my inquiries are as follows:

Spencer: “So, why is Elvis important?”

Spencer’s Mom: “He was the very first rock star. The first musician that you followed, and cared about, and joined his fan club. We bought his records as soon as they came out and listened to them all the time. ‘Hound Dog,’ ‘Heartbreak Hotel,’ ‘Love Me Tender’…all of his early ones”.

Spencer: “And on a personal level, what was his appeal?”

Spencer’s Mom: “Well first of all, his music. It was fantastic. He had that wonderful voice. And he was an exciting looking person. Dangerous looking. He wore tight pants and he shook his pelvis and people found that completely inappropriate. Young people loved him and parents HATED him”.

I guess people of my generation forget how shocking Elvis’ looks and moves were at the time. In our current era of dressing like a stripper on primetime TV being the new status quo, I think we’ve all become a little blasé about what constitutes provocative behaviour. I mean, I remember when Christina Aguilera first wore her assless chaps in the “Dirrty” video, and now it’s like “assless chaps? Yawn. Show me something I haven’t seen”. 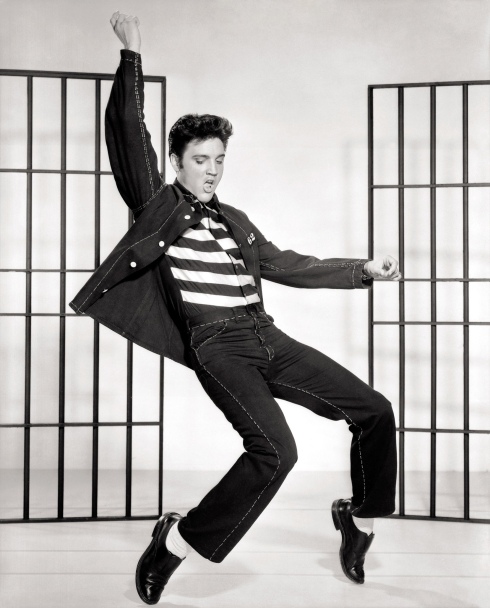 Skinny jeans they ain't, but I can see how these pants would have been considered tight by the standards of the day. By the way, I just realized that MJ totally ripped off this move. Man, I need some serious schoolin', don't I?

Next up, I interviewed a man who has regaled us over the years with many a rant about Elvis and the music of his generation.

Spencer: “So, Elvis. What’s the big deal. Why was he important?”

Thinfinn’s Dad: “He changed the course of music for all time. Prior to Elvis, music was mellow. Big band sounds and all that. That music had been around since the ’30s and it was getting a bit stagnant. There were some good songs, some great songs, of course, but it was starting to lack in excitement. Then Elvis came along. He wasn’t the very first, of course. There was Bill Haley and the Comets, with ‘Rock Around the Clock,’ and Carl Perkins. But those guys didn’t hit in quite the same way that Elvis did”.

Spencer: “Why do you think that was? What did Elvis have that those guys didn’t?”

Thinfinn’s Dad: “With Elvis, my generation was ready for it. We were probably looking for something…we were war babies and lived through that era. Most of us were probably too young to remember it entirely but we caught glimpses of it. So we were ready for something, we weren’t quite sure what, but when Elvis came along we recognized what we had been looking for. His voice, his antics onstage…I’m sure part of what helped propel him was the American reaction to him. People going crazy, denouncing him, trying to ban him from performing onstage. That only helped drive his popularity”.

Spencer: “Yeah, I think that’s often the case. Take Lady Gaga right now. She’s not being banned or anything, but people calling her work scandalous is having the effect of other people saying ‘hmmm, this is interesting…'”

Thinfinn’s Dad: “Yeah. It’s hard to explain the total phenomenon of Elvis. There’s gotta be smarter guys than me who have tried…all I can say is that he changed the course of music. Music was never the same again. He paved the way for all the acts that came after him. The Beatles attribute a lot of their success to Elvis. Other artists as well”.

Spencer: “Yeah, that’s true. Okay, thank you for your thoughts on this!”

Thinfinn’s Dad: “No problem. By the way, I read your piece on hurtin’ music. You know, the sad songs. You really missed out on someone: Patsy Cline. She was the hurtin’est of ’em all.”

Thinfinn’s dad: “Patsy Cline’s Greatest Hits! Get yourself a bottle of wine and Patsy, and then you’ll know what I mean.”

Oh man. Turns out I need some schoolin’ in a lot of subjects…

Anyway, when it comes to Elvis, I guess you could say that he was the complete package. Talented, hard working, amazing voice, killer looks, attitude, and tight pants to boot. What’s not to love?

On Saturday night of Elvis Fest 2011, there was a lotta Elvis love in the air at the Collingwood Arena for the “Salute to Vegas” event. I need to stop here for a sec and say that there were a million events going on over the course of the festival. Thinfinn and I made it to a few, but there was a lot that we missed — I think it’ll take us a few years to hit up all of the annual events. In short, if you are an Elvis fan, this is the place to be. Anyway, there were some excellent performances during the “Salute to Vegas” show, but the best by far was Shawn Klush, a professional Elvis Tribute Artist and winner of numerous competitions including the “Worldwide Elvis Competition,” the “World Elvis Tribute Artist Competition,” the BBC’s “World’s Greatest Elvis” and the prestigious Elvis Presley Enterprises’ “Ultimate Tribute Artist Contest”. This dude is legit, y’all. He had all the moves down cold, and he was workin’ it up there. His act was more polished & professional by a long shot than many of the other ETA’s we saw over the weekend. That’s only to be expected though — some of these guys are just there for fun, while others, as previously mentioned, have made a career out of this. 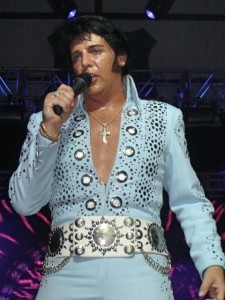 Sunday morning, the last day of the festival, we returned to the Olde Town Terrace for a little Elvis Gospel brunch action. 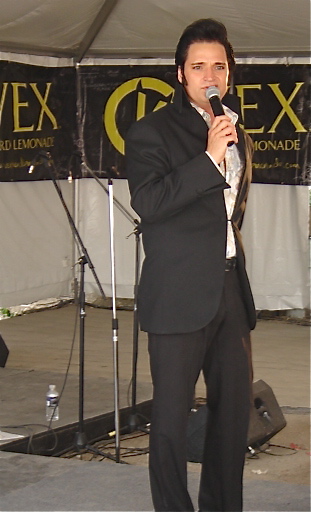 Reach Out to Jesus, brothers & sisters!

Y’know, apparently gospel was Elvis’ favourite style of music to sing. Underneath the tight pants and the rebellious rock ‘n roll image, Elvis was, at heart, a good boy who loved his momma, loved Jesus, and America too. The end of his life was marked by depression, drug abuse, and declining health…but when you listen to him sing gospel, well, you know that’s when he was free.

After breakfast, we headed back to Collingwood’s main drag for one last shot of the carnival-like atmosphere. 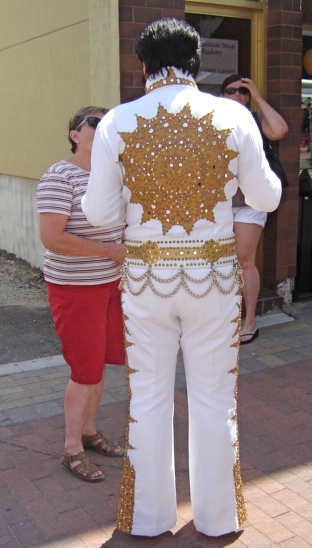 Charming the ladies in a seriously awesome jumpsuit

Will we be back next year? You bet your blue suede shoes we will!

This entry was posted on Thursday, July 28th, 2011 at 8:39 pm and posted in Live Music. You can follow any responses to this entry through the RSS 2.0 feed.
« Long Live The King
Love Is a Battlefield, Part 2 »