When my birthday rolled around this year, Thinfinn asked me what I wanted for a present.

“A pair of Docs” I answered immediately.

Like practically every other young person who came of age in the early ’90s, I had owned a pair in high school that I wore until they were worn out. Mine were navy blue, 8-hole, and I got them during the summer between grades 10 and 11. At the time, I loved them for a multitude of reasons: they looked great with everything, they annoyed my mother (“are you going out to kick someone’s head in?” she would ask as I was on my way out the door), and mainly because I just felt badass when I was wearing them.

When I first met The Finn he was still rocking the pair of 8-hole ox bloods he’s had since the ’90s, and I just thought they looked so cool. After he purchased a pair of 8-hole cherry reds a couple of years ago, I seriously started obsessing on the idea of picking up a pair for myself. I didn’t want to rush into it though. With these boots, the more worn in they are the better, so I knew mine had to be ones that I’d want to wear all the time.

A brief history of Doc Martens: the now-iconic boot was originally the brainchild of German physician Dr. Klaus Marten, who designed them after suffering an ankle injury while skiing in the Alps. Finding the standard-issue army boots of the day too uncomfortable to wear, he set about designing his own modified pair of boots, with softer leather and a cushioned sole. He teamed up with another doctor pal from university and they manufactured the footwear, eventually attracting the attention of British shoe manufacturer R. Griggs Group, who purchased the patent rights for the boots and set about producing them in the United Kingdom.

Doc Martens soon gained popularity amongst postal workers, police officers, and factory workers. The style was adopted by skinheads in the early ’70s which I suppose makes sense, since they are a tough-looking boot. The first musician I can think of who wore them was The Who’s Pete Townshend, and since then they have enjoyed a close relationship with the world of rock ‘n roll, turning up over the years on everyone from Sid Vicious to Joe Strummer to Damon Albarn. 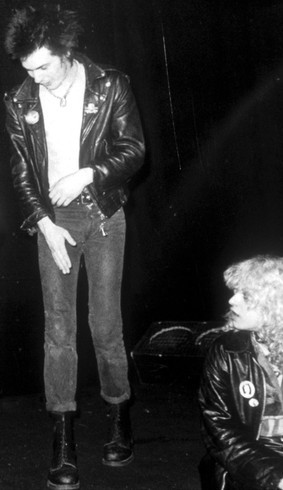 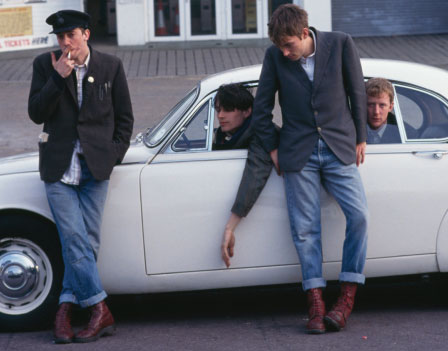 When I first started thinking about it, I was pretty sure I wanted to go with the classic black 8-hole style. I like Thinfinn’s cherry reds, but I wanted something that I could throw on with literally anything. Plus, the black ones were favoured by my #1 crush of all time, Paul Simonon of the Clash:

With that in mind, Thinfinn and I hit up the Dr. Martens flagship store on Queen West in Toronto.

And holy shizz, dudes. Are there ever a lot of styles nowadays! I had no idea.

I first tried on a pair of black ones:

but was quickly distracted by all of the shiny pretty things in the store.

Here are but a few of the styles on offer:

I would so rock these if I could get away with it.

Both of these are also pretty rad. 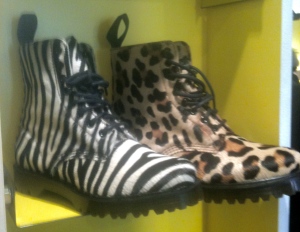 You can’t really go wrong with animal prints in general, and these ones certainly make a statement.

These are okay, but a little too girly for me. 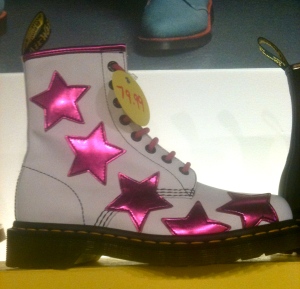 Ditto these ones. That’s a bit much. 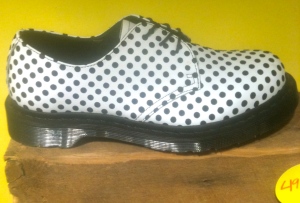 Here we have some black-and-white polka dots. Bit of a mod vibe. 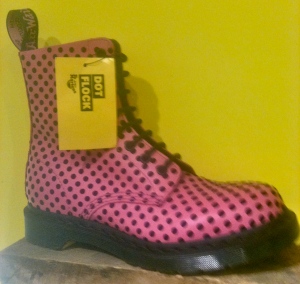 Another polka dot style, but too aggressively pink for my taste.

Ohhh….these tartan ones are awesome.

Whatever your taste, there is no doubt something here for you. In the end, I spotted a pair of 12-hole black ones with gold grommet detailing.

I laced them up, and was very pleased with the results.

They weren’t exactly what I had in mind when I walked into the store, but they fulfilled my criteria of “classic” and “versatile” with the added bonus of some flashy metallic styling.

So, if you see me stomping around town in my new boots, lemme know what you think!

This entry was posted on Sunday, April 24th, 2011 at 6:04 pm and posted in Spotlight on Style. You can follow any responses to this entry through the RSS 2.0 feed.
« Pixies Play Massey Hall
Shazamit! Vol II »

10 responses to “Walking on Air(Wair)”